Home >  Blog >  BOOK REVIEW: How the Rich are destroying the Earth

BOOK REVIEW: How the Rich are destroying the Earth 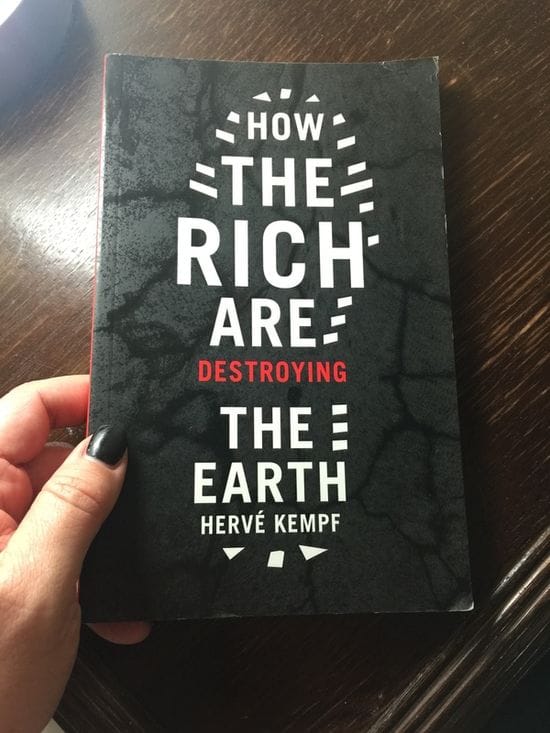 BOOK: How the Rich are destroying the Earth
AUTHOR:  Herve Kempf
Reviewed by: Kirsten Lowis

This is one book about our environment and economy that you must read.  It's by an author who stands to be independent and to produce information that is precise, pertinent and unique without, in my view, becoming too doomsdaysim.

I picked this book up at the Black Cat Bookshop in Queenstown last month.  The first paragraph got my attention... "So why the hell shouldn't the rich destroy the planet? After all, it's theirs. They own it, but we're just renting space. Landlords do what they want with their property...". Hmmm. My curious mind said read on, and so I did.  Particularly when I just finished watching a documentary on the Rothschild dynasty who researchers estimate their wealth to be more than $500 trillion - that's more than half the wealth of the entire world put together! (cue the sound of crickets...)

On reflection, Kempf didn't exaggerate at any point, however he did present some tenacious facts on the planet's ecology and the social system that governs our human society.  I have googled so much since reading this book - gasping at things like "Relenno Sanitario" and "Great Pacific Garbabe Patch". Warning... I'm really passionate about this book, and I hope that my review doesn't scare you away... please read on - there's some interesting things to bring to light...

It took me about 3.5 hours (and a few glasses of red) to devour the 100 page paperback. My jaw was dropping and I was scribbling notes madly at reading Kempf's (often shocking) dissents on the rich versus the rest of us and how the resource rapist "entrepreneurs" and "rainbow coalition of hyper-rich destructo-crats" are holding hands across our continents right under our noses and causing illness in our environment by two arms of the same beast, "grotesque market profiteering" and "planetary corrosion".  Reading this book highlighed the fact that environmental devastation is a class war by other means; it's not about attitudes or habits, or greenies versus developers.  It's about the rich versus the rest of us, derived from a system of "dominant social stratum that today has no drive other than greed, no ideal other than conservatism, and no dream other than technology".

Kempf goes on throughout the book to say that material growth (which we have had unprecedented levels in the past millenium) intensifies environmental degradation.  Makes sense, right? I heard on ABC Radio today that Bangladesh crams 160 million people into a (mostly flooded) landmass twice the size of Tasmania - and here's the kicker - they have over 160 million SIM cards!!!! WTF? They don't even have electricity, but there are mobile phones everywhere.  Think about that for a minute.  I'm still scratching my head!

So, the question begs - how does our shitting all over the environment affect us as humans?  Even though Kempf wrote this book 10 years ago, he discusses the terrorist attacks elicited of the US in 2011 and how situations that create (mental issues such as) fear, lead to social chaos or dictatorship, and therefore we focus on "the posibilities of human life on the planet" rather than "the Earth".  Now, the book does carry on a little bit about chemical pollution (plastics, insecticides etc) and cancer, global warming and things not seen on the planet since the Dinosaurs, but not to the extent that I want to run for the hills.  But, here's some of Kempf's excerpts worth quoting that "socially responsible investments" have caused: Exxon shitting black oil all over the Alaskan coastline and the black ink on the bottom line. Avian flue epizootie. New Orleans flooding. Tornados and heatwaves. 2003 heat wave of summer in Europe. Deforestation in South America. 300 million chinese - close to 1/4 of the population - drink polluted water. TheChinese air is so saturated with sulfur dioxide that the country has experienced severe acid rains. Chernobyl. Landlords dumping arsenic in drinking water to get at their gold, and melt our polar caps to get to their oil.Rising Sea Level is like rising inequality eg. Al Gore and George Bush telling us to reduce our carbon footprint from their private jet... and so many more.

By the end of this book, I did feel a tinge of defeat and helplessness.  It's obvious that our system is stubornly incapable of changing any time soon. But there was one sentence on page 19 that stuck with me throughout the book; "Possible fuses that could flare up in an economy approaching saturation is a halt in the growth of the US economy, undermined by three giant deficits - the trade deficit, the budget deficit, and domestic indebtedness.  Like a junkie who can stay standing only by shooting more heroin, the US, doped up on hyperconsumption, staggers before it drops. The otherr is a Chinese crisis that would reverberate around the whole world".

This was nothing short of eye-opening and worthy of a re-read.

"Naive comrades, there forces at work and there are evil men on Earth." - Herve Kempf