Posted by Kirsten Lowis on 1 August 2016 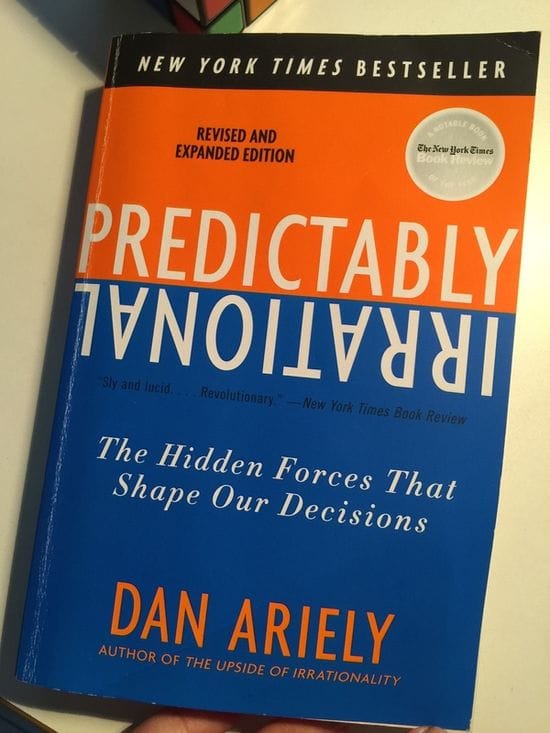 My good friend John Kerrisk came to Book and Beer at City Lane a few Wednesday's ago with an arm full of books, with one of them being Predictably Irrational: The Hidden Forces that Shape Our Decisions (2008).  I had heard of Dan Ariely's work and blog, but never got around to reading any of his material until now.  So as a good friend, I decided to help Johnny with his mammoth reading task by taking the reins on this 304 page paperback. It was Ariely's words in the preface that stated "the economic world is full of a lot more weird, irrational quantum effects than we assume".  Sounded good to me!

So, I read the book, and then I had turned back to page 1 and read it again.

Why do our headaches persist after taking a one-cent no brand paracetamol but disappear when we take a 50-cent Nurofen?  Why do we splurge on a lavish meal but use discount coupons at Woolworths?  Why do we go back for second helpings at Sizzler, even when our stomachs are already full?  And how did we ever start spending $4.00 on a bottle of water when it comes from the tap for free?

When it comes to making decisions in our lives, we think we're making controlled, smart and rational choices. But are we?

This guy is not only a talented wordsmith he is a very funny, clever social scientist who illustrates his theories on human behaviour through simple and goofy experiments of what people actually do when they make real-life decisions and the real laws that drive human choices.  I particularly enjoyed reading the 2 experiments on measuring work performance among randomly selected groups of people and how arousal and the Ten Commandments alters sexual attitudes.

He talks a lot about using "Illusions" as a Metaphor for rationality ie. "Our intuition is fooling us in a predictable and consistent way".  For example, we know our irrational self falls easily into impulsively wanting stuff we can't afford and don't need. So he proposes a credit card that encourages planning and self-control and when you have reached $50 on chocolate (shoes, handbags, hair, makeup..) in a month pfft, declined! Imagine that!? Ariely said that he suggested this idea to a major bank, but cutting the $17 billion a year they make on consumer credit-card interest didn't interest them. This is ultimately predictably irrational!

So, he reminds us that "we dedicate more hours of vision in the day than we do anything else which means we make decisions on what we see".  We wake up in the morning, and we make decisions until we close our eyes at night.  We wake up every day, and immediately make a decision on want we wear, what we want to eat etc.  These decisions are being designed for the person they are for me, myself and I, and we have such a feeling that we are in control, but in fact it is an illusion.  There are so many hidden influences all around us subliminal influences that skew our reasoning abilities. Ariely says if we have predictable repeatable mistakes in vision (which we are good at), what's the chances that we make more mistakes with the things we are not good at (or aware of), such as financial or relationship decisions. A case of what we don't know, we don't know or furthermore, we believe what we see, and what we see can be an illusion.  The entire book touches on the hidden forces that shape our decisions, including some of the causes responsible for the current economic crisis. "Why would the family buy an Audi instead of a sensible minivan?".  He talked about how we value the things we own vs. the things we desire (check out 'econopocalypse'). He talked about decoys, incentives, cheating, self-fulfilling prophecies, self control, discipline and also provide an excellent framework to get our economy buoyant again. (Scott Morrisson needs to take a leaf out of this book!) Ariely offers his own insights into the irrationalities of everyday life, the decisions that led us to the economic meltdown of 2008, and the general ways we get ourselves into trouble. Some of the questions that he debunks are; How do we think about money? What caused bankers to lose sight of the economy? What caused individuals to take on mortgages that were not within their means? What irrational forces guided our decisions? And how can we recover from an economic crisis?

It's true, once you see something, it's hard to unsee it.  I am now observing and questioning the price of everything, the sly decoys that influence our choices and why we consistently overpay, underestimate, and procrastinate and how powerful the force of 'marketing' really is.  We as a society haven't yet understood the profound effects of our emotions on what we want, and we overvalue what we already own. These choices are systematic and predictable, making us "predictably" irrational changing the way we interact, one choice at a time.

Are we down the rabbit hole yet?

"We aren't cool calculators of self-interest who sometimes go crazy; we're crazies who, under special circumstances, are sometimes rational."