Posted by Kirsten Lowis on 1 February 2018 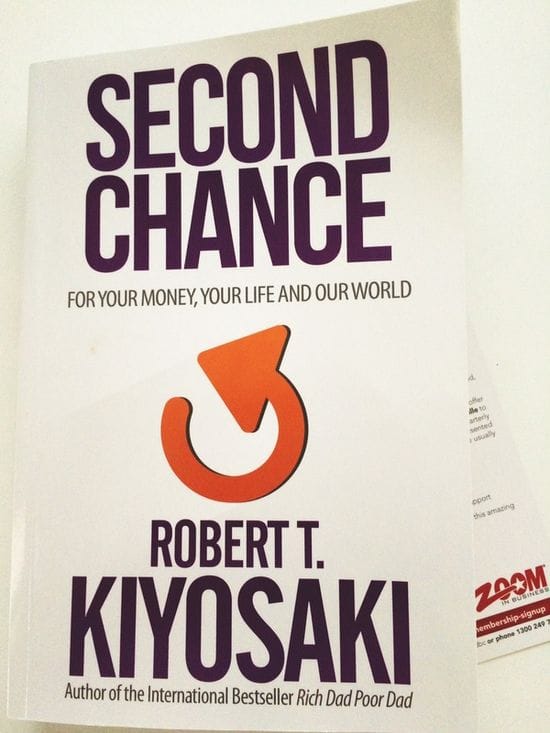 Book: Second Chance - for your money, your life and our world
Author: Robert T Kiyosaki
Reviewed by: Kirsten Lowis

It has been an epic 6 weeks of reading for me, but the stand-out book was one that Santa left in the stocking "Second Chance" by Robert Kiyosaki.

I am a big fan of Kiyosaki's books Rich Dad, Poor Dad in the early 90's, Cashflow Quadrant a few years later.  Although his (epic) board game has been a favourite of mine, Kiyosaki hasn't delivered until now.  I read the entire book in a night, and his Second Chance was outstanding.  My note taking was ridiculous.  I could not put the book down.  It was 3.30am when I finished, and my brain has since been thinking about his thought-provoking philosophy that "a coin has three sides.  Heads, tails and the edge."  Living on the edge allows you to see both sides of a situation, or it could symbolise the past, present and future which define the 3 parts to the book.

There's a few brutal worldly realities that Kiyosaki expresses that cannot be ignored, for example the visual agents of change have now become invisible and much harder to see.  In today's fast-paced world, we believe what we see, and it's stunting our growth as humans.  Our teenage children are perfect examples of the effects of this change.  Kiyosaki claims that if we can train our minds to see what our eyes cannot, we have a 'second chance' for our money, life and our world.

The Cashflow Quadrant makes an appearance throughout the book, and I myself have been in all four quadrants: employee, self-employed, business owner and investor.  Kiyosaki talks a great deal about the government, tax law, paying taxes, printing money, IQ, EQ, generalists, specialists and education.

The kicker was a bold prediction that there will be a significant financial crash by 2016 (this year), and if his prediction does not prophesies it will be "due to artificial propping up".

Along with the Cashflow Quadrant model, Kiyosaki describes 3 types of wealth.

1. "Primary wealth is resource wealth."
If you own actual oil (not oil funds or shares in companies that are involved in the oil industry) you have a protection that those with only tertiary wealth do not have. It's not just oil you own,  it's fertile land, trees, and other natural resources, and Kiyosaki includes gold and silver in this category.

2. "Secondary wealth is production wealth."
Those who work directly (and own businesses that) produce food or other products, dealing with the resources owned by those with primary wealth.

3. "Tertiary wealth is paper wealth."
These are savers, those with money in the bank or invested in stock market.  A majority of the population (particularly baby boomers) fall into this category. This is the class of the "affluent investor," and those who will be hit hardest by the next (or any) market crash.

A highlight of the book was the threads of wisdom from the legendary futurist R. Buckminster Fuller (https://bfi.org/about-fuller/biography). "Bucky" is a hero to Kiyosaki, myself and many others who strive to tap into the potential of innovation and technology design that creates leverage (more with less) to improve.  It was refreshing to have Bucky's literary genius involved.  My interest spiked about 1/3 into the book when Kiyosaki really started to delve into some interesting data, adventures in his own revolutionary thinking and his ambition to help people (who aren't accountants or have a financial education) understand the terms of an 'asset' and 'liability' in a financial context.  The book is definitely targeted at readers who aren't financially educated or looking for a quick fix, instead they are likely to be wanting self-education or a boost by real estate seminars to improve their own wealth, rather than using wealth to do good for others.

I've also just finished reading Harry Dent's The Great Crash Ahead. I believe that my review has been slightly influenced by my interest in learning more about the past, present and future of our economy.  I do agree it's a great time for caution in our business affairs.

For me, the book started with a ho-hum Q&A mostly discussing American fiscal data, arguments and theories about wealth and education,  as well as touting his success and the not-so-subtle pitch to use his products.  That always annoys me. Also, I found of the graphs in the book were questionable - they were almost doomsday to anyone who isn't sharp in economics,  however the visual representation was effective.

It's a thought-provoking read.  I felt motivated and educated after closing the book.  If there is a market crash similar to 1929, it will ruin the world as we know it.  But that is tomorrow, and it is today and that's what the book is about - be prepared.  Don't let the world's economy or anyone else dictate our level of success. As much as we would like a crystal ball to predict our future, the fact is that markets will fluctuate, businesses will still start and fail, resources will continue to dry up, and there will always be someone/something that is more powerful than you and I'm not referring to God. We need to take back control of our own individual and business income and balance sheets by becoming more financially literate.  It's time.  It's time to ask for help instead of waiting for the crash, death, destruction, disease, divorce, dissolution, despair.  Be prepared for anything and this book reminds us to know our numbers.

"Always remember, the rich do not save money.  The rich keep their money moving at high velocity.  This is the opposite of "parking" your money for the long term.  Financial education is the opposite side of the coin."