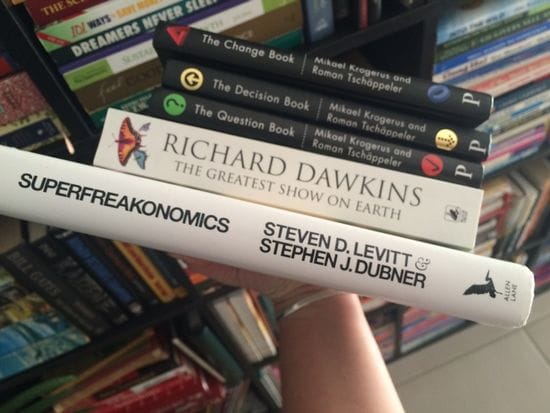 Superfreakonomics is the frequal to Freakonomics by the superfreaky duo, Levitt and Dubner (did I just take that too far? Haha.)

One of my best friends just bought me a copy of "When to rob a bank", which is the much anticipated third book and pretty much a blog summary and I'm champing at the bit to read this week I'm totally hooked.

My brain has been changed by reading these books it's the unflinching analysis of controversial, often politically incorrect subjects, and thinking a little differently about them and then coming up with often simple solutions always backed by data.

With terrorism, violence, organ farming and so many other insidious acts in the daily headlines, I've always been intrigued at how Dictators influence the masses. Brainwashing? Bullying? Threats? What would make another person obey an order that kills people and ruins lives? What would make someone stay with someone who hurts them, or hurts others?  Do the followers think they're doing the right thing, or the wrong thing? What did these followers consider their morals to be?

It was about half way through the book (p123) that I stood in my tracks and looked squarely at the link between 'context' (rational behaviour), apathy and altruism when the guys quoted an infamous lab experiment by psychologist, Stanley Milgram (1963).  As any curious Fox would do in a case like this, I went down the rabbit hole and researched more about this experiment.  It astounded me that a group of 40 volunteers in this experiment punished an unseen person in the next room with a series of increasingly painful electric shocks when he gave the wrong answer that the group asked.  This group of 40 people were normal, regular citizens who were probably not crazy on the idea of the cold-blooded killing or torture of humans or animals - they simply responded to a newspaper ad to be in a study.  But being egged on by an experimenter, 26 out of the 40 volunteers tortured that person to death before discovering the experiment was bogus!  There was just one authority figure in this experiment of Milgram's and it confirmed that morality isn't the reinforced concrete we think it is - it's more like a rubber band. We bend and stretch it because it often makes good sense to do what someone tells us to do, or what everyone else is doing. We mimic others.  If I cross my legs or rub my nose, you will too and like chameleons, we are able to switch our moral colours to match the landscape - and that's where these guys really take the freaky to another level. These guys have managed to link altruism to terrorism. WTF?
If you've read this far, I'm certain you will also enjoy the easy read, delivery of the message and their scrutiny of the context which at the baseline, is what economics is about - all while scratching your head. The thing is... instead of sitting in an economics lecture and learning from a dry and lifeless text book, turning these pages are like walking the lively streets of New York with these two Freaks looking at the world through their eyes... you too will soon realise that many seemingly moral or altruistic acts are no longer altruistic.

Actually, since reading the 200-odd pages of this freakquel, I'm looking at life (and context) much differently. We've all seen the news and it's choking, filthy stories.  But in particular, I looked at the fear that even the television presenters/producers portrayed when reporting on the recent shark attacks.  What impact/influence do you think they have on their audience. Let me explain Karl Stefanovic says, "Look at the size of it (shark). I'm not going to ever swim at Bondi again", to which Eddie Maguire replied "I think there's more sharks on the beach than there is in the water!" Boom!

"Sharks come silently, without warning.  There are three ways they strike: the hit-and-run, the bump-and-bite and the sneak attack.  The hit-and-run is the most common." (p14)

Who is the shark?  What should we be afraid of?

If Levitt and Dubner can prove that you are more likely to be killed walking drunk than driving drunk, you will have to read and believe it for yourself.