BOOK REVIEW: The Great Crash Ahead 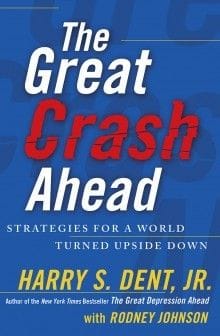 I take great interest in learning more about how banks do business, particularly with the world getting older, and our economy is getting weaker.  Not a sexy subject, but it's very, very interesting to delve into how our economy was, how it is now and how it could have been.

This month I read 4 books (The Freaks Shall Inherit the Earth - Brogan, No More Mistakes - Sherman and just to finish the series, The Land of the Painted Caves - Auel).  I decided to review Harry Dent's The Great Crash Ahead: Strategies for a World Turned Upside Down.  It's a relevant and challenging book.  Plus I just watched The Big Short at the Cinema last week, which inspired me to read this book in 4 days when it could have taken me 2 weeks!   In fact I've read most of Harry Dent Jnr's books, including The Great Boom Ahead (1993), The Great Jobs Ahead (1995) and The Great Depression Ahead (2009). He likes making predictions and gives us some clues into the meaning of our financial history vs. projections based on the ups, downs in the market.  These are things that most of us don't pay enough attention to.

There are seasonal cycles with everything that relates to money.  I was 19 when the boom hit - it was the economic Autumn.  Looking back, my priorities and preferences have changed so much.  Harry talks about the natural lifecycle of spending, and how our priorities change - but most of us are not preparing well.  This is the moral of the entire book

The past 2 decades have been high growth driven by the concerted earning and spending patterns of my parents generation.  The Baby Boomers are the largest generation in history, and Harry says "they are saving more, spending less, causing deflationary trends as they increasingly retire, and have predictable needs and spending habits as they age".

This book was great for me as a business owner, business valuer and a consumer.  We all want success, and expanding when things are good is easy - there's plenty of growth for us and our competitors to share, BUT living and managing a business during a downturn with a shrinking economic pie is very difficult, and with it comes tough decisions.  How many of you know someone who has had to downsize their business, reduce their employees, sell low performing assets or even close?  It's a different newstory for savvy business owners who have conserved assets, have a business plan, buy out a competitor, cultivate/generate streams of income or preserve the capital and assets.  It's these guys who will be Kings and Queens when the next season of growth begins.

Harry talks about creating money, using an analogy of a 'saver' vs. a 'borrower'.  I must scribe it here, because I read this chapter to my 16 year old daughter and she was amazed.  For the financially astute, please skim through.  Otherwise, if you haven't heard of 'Fractal Reserve', read on.  From page 116, Harry states that "anyone who takes a loan, spends on credit or any other way borrows money from a lender is actually creating money and Fractal Reserve is a process that modern bank lending is founded on."   A saver will take their money to the bank and deposit it.  But the money does not stay at the bank.  Instead, the bank lends out most of the savers deposit, keeping only a small amount of it, or a fraction of it, on reserve.  The bank earns interest on what it has lent out. He simplified it further with the following analogy:

John Saver deposits $1000 to the bank the bank records this as owing John $1000.  The bank will loan out most of this deposit to Susan Lender the bank records that it has lent $900 to Susan, who owes that amount to the bank.   In effect, the $900 that Susan received was lent into existence, as 2 different people (John and Susan) claim ownership of that money AT THE SAME TIME.  The money simply didn't exist before the bank lent it to Susan.  Susan is free to spend that $900 on whatever she likes eg. to pay a builder.  If that builder now deposits the $900 in his bank, then his Bank will lend 90% of that amount ($810) to another lender.  And that continues on and on until the original $1000 represents 10 times that ($10,000) in the economy!  Get it?  So $9000 was created out of thin air.  Therefore, the larger the amount of lending in the economy, the greater the expansion of money supply, and in the 2000's we spent on just about everything under the Sun by finding new ways to expand credit.

The problem came when i was 19, and our world economy moved into the economic Autumn. The investment banks got into the act and started leveraging to the hilt at 25x and 30x much more than the commercial banks who were limited to 10x leverage.  Debt creation (new lending) exploded.  I'm leaving it because there is just so much to write about.  If you're interested in this, leave a comment or you'll have to grab the book and learn more.  I actually re-read this section twice.

The writing was on the wall in the late 2000's, and it was only a matter of time until the house of cards collapsed on itself.

The good news is that businesses can "dominate the years to come" by focusing on cash and cash flow, being "lean and mean," deferring major capital expenditures, selling nonstrategic real estate, and firing weak employees now.

Harry states that the big four challenges in the years ahead will be:
1) private and public debt
2) health care and retirement entitlements
3) authoritarian governance around the globe and
4) environmental pollution that threatens the global economy.

After reading this book, I've realized that 20 years of spending is exaggerated by an unprecedented debt bubble.  The world really did turn into a giant ATM. The big reality for me is how we have been spending "OPM other people's money" to dizzying heights on stuff - cars, houses, holidays, TV's, dining out, clothes - you have it, we bought it.  And what worked in a boom, does not work in a downturn, just like what works when you're 30 doesn't work when you're 70.

This book undresses traditional assumptions of economics. Harry argues that the government doesn't drive the economy, consumers and businesses do. The Great Crash Ahead is about planning and making smart, cautious investments by avoiding the sort of high-risk, high-profit investment schemes that sank the world economy.

My daughter finishes grade 12 this year and she will be entering into adulthood in the economic Winter, which will have a profound and dramatic effect on Australian employment, income, personal investments, business valuations, health care and education. But just as in nature, some areas will thrive during winter. I hope our children and grandchildren learn the valuable lessons of spending "OPM".  Planning is especially in order for both business and households who will not be immune to the upheavals ahead. Future generations will need to be more diligent.

"You can contribute to the solution by conserving your financial assets and reinvesting them after the crisis." Cheerful stuff, hey?.

PS. If anyone has read Harry Dent's latest book Demographic Cliff: How to Survive and Prosper During the Great Deflation of 2014-2019, please leave a thumbs up or down in the comments.  So far, I love his work it is very serious, engaging and extremely convincing and despite the pages and pages of notes on The Great Crash Ahead, I've managed to pluck out the best morsels for you in this review.