Home >  Blog >  BOOK REVIEW: The Widow Clicquot - The Story of a champagne empire and the woman who ruled it

BOOK REVIEW: The Widow Clicquot - The Story of a champagne empire and the woman who ruled it 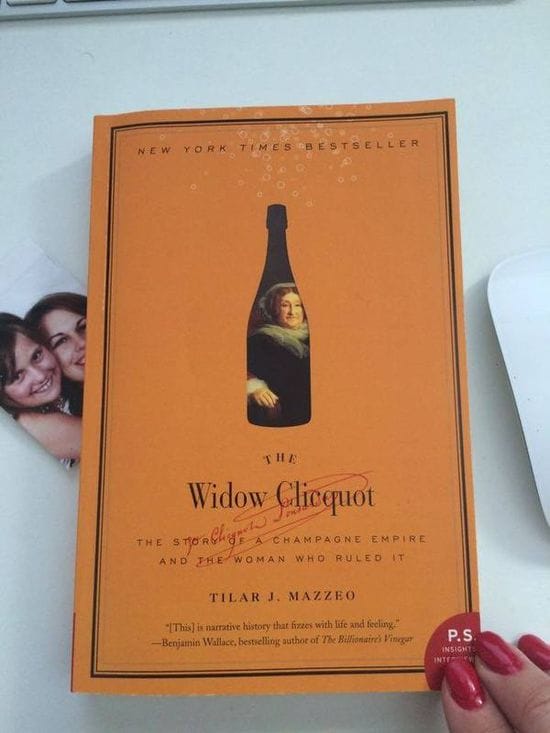 Book: The Widow Clicquot - The story of a champagne empire and the woman who ruled it
Author: Tilar J. Mazzeo
Reviewed by: Kirsten Lowis

I adore champagne and I'm lucky to fly with a flock of birds who join me in having the same taste for intoxicating top shelf bubbles that tickle our noses. One of our favourites by far is Veuve Clicquot.

It wasn't until I read Tilar J. Mazzeo's biography of Barbe-Nicole Clicquot Ponsardin that I appreciated the rich and elegant story behind Veuve (French for Widow) Clicquot Champagne and its trademark yellow label.

Firstly, there's just something nostalgic about reading a paperback version of a book - particularly when it is an endearing gift from a friend (thank you Kathy <3). This book has a familiar yellow cover, just under 200 delicate pages with a yesteryear charm and the smell of fresh ink. Add in a few glasses of Veuve bubbles, and reading "The Widow Clicquot" was an afternoon made in heaven.

Inside, it was a fascinating story of Barbe-Nicole, who was an upper-middle class young woman in the late 1700's who unexpectedly took over her husband's wine business - when the idea of woman entering into business was unheard of - and created a global Empire.

The book focussed much on Barbe-Nicole and her husband Francois Clicquot, who died when she was 27.  Mazzeo is not decisive on what the cause of Francois's death was, but claims it was either typhoid or suicide that plunged Barbe-Nicole into a new life. Regardless, his death left her devastated, raising a child on her own and a struggling business which could have destroyed her. But she refused to fail. By all accounts, she was an intuitive entrepreneur with a mindset and attitude that I could relate to, and in my opinion - seemed to align more to our world today, than in the 1800's. She was smart, stubborn and she understood quickly that widows were "the only women granted the social freedom to run their own affairs". So, with the audacity to succeed and with wind in her wings, she flew. Mazzeo writes that the "Widow Clicquot was at the helm of an internationally renowned commercial empire and she was one of the first women in modern history to do it". In 2012, according to Wikipedia, Veuve Clicquot was the second highest selling brand of champagne in the world with 1,474,000 nine-litre cases sold worldwide. How's that for smashing!

But, the story could have swiftly ended along time ago if it wasn't for the "luck of timing". Champagne was a risky business.  When you think about it, there were no factories that mass-made glassware or bottles 200 years ago, so much of the work that glaziers did was misshapen and flawed, and often couldn't withstand the pressurised contents. "Breakage rates could be ruinous.  In a hot summer, eighteenth-century vintners sometimes lost as much as 90% of their champagne stocks". Facing bankruptcy and a failing product, Barbe-Nicole took a huge gamble and targeted the Russian's burgeoning desire for the taste of champagne. Risking her inheritance, Mazzio writes that she "goes to her father-in-law and says, I'd like to risk my inheritance, I'd like you to invest the equivalent of an extra million dollars in me running this wine business." And he says yes. He believed in her, and that was cause enough to drive her to succeed.

Even back in the day where men ruled, Barbe-Nicole's audacity seemed to have been unleashed around the time that Napoleon abdicated in 1814 which made cause for toasts among both the British and Russians. "Champagne," Mazzeo tells, "was on its way to becoming another word for mass-culture celebration." She saw the opportunity and that was the making of "The Widow" champagne that we now know as Veuve Clicquot.

Throughout the book, Mazzeo writes a great deal about Barbe-Nicole's journey through the process of painstakingly finding a way turn the cloudy and visually unappealing wine into a "champagne that was as clear and flawless as a diamond". Barbe-Nicole was obsessed with finding a technique to drawing sediment from the liquid to the bottle's neck and she did. It's called "riddling". I stopped on about page 56 and searched online for more information to really understand just how complex this process was (thanks Wikipedia for explaining this so well) so that the next time I pop a cork or sabrage a bottle of Veuve, I understand exactly what I'm dealing with!  Alas, I also learned that "you know you're in the presence of an expert when there is no pop at all..it should sound (ahem) like the sigh of a woman when you are making love". Oui, seulement en France! Haha! Love it.

So, before you pick up this book, I think you'll need to know a bit about champagne - either the making or drinking of it - to grasp the enormity of what this incredible woman invented despite decades of great economic crises, a war and personal tragedy. I had no idea that the designing and making of champagne was so complex and intricate.

If you like history and champagne, you'll love this book. It is well written, researched and portrayed Barbe-Nicole Clicquot Ponsardin as a pioneer in a man's world.  She was a daring, determined, cunning, tenacious, audacious and intelligent woman who took control of her own destiny when fate left her on the brink of financial disaster. There's no doubt that the luck of timing, or the enormous investment of money from her father-in-law helped make her legacy. But she was naturally an innovator, a marketer and an achiever and she had no problem about using emotion to drive her business.  She devoted her life to being the best business woman she could be and was generous to others.  I found her crossroads of grief and loss and opportunity are crossroads that I have also come to know well in my young life and I've found great inspiration and an opportunity to learn the finer points of champagne, just by reading 185 pages.

With Christmas and the New Year celebrations approaching, and all those corks of Veuve Clicquot being popped, I "celebrate" this marvellous Madame who has inspired my spirit, enriched my flock and who will be the cause many more skull-aches indeed.  This is one book that I treasure forever.

"The world is in perpetual motion, and we must invent the things of tomorrow. One must go before others, be determined and exacting, and let your intelligence direct your life. Act with audacity." Barbe-Nicole Clicquot Ponsardin