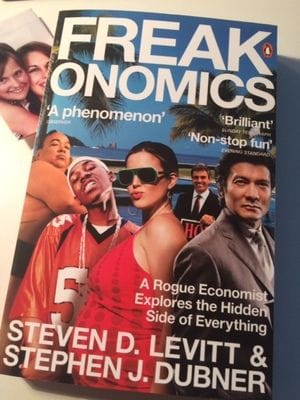 Chaos is the science of surprises, and this book was total freaky chaos (in a good way).

Within these 280 pages, I began the funny, weird and chaotic journey with these two rogues by stripping a layer or two from the surface of modern life to explore the hidden side of everything.

There's something pretty awesome about getting a general worldview idea of econometrics where we practically measure jobs, real estate, watch the stock market breathe in and out, or predict what's going to happen next with the growth or decline of our economy, deflation, inflation, taxes etc. These are all calculations of our everyday life. But when we can dismiss science and religion to its most primal aim, our ecomony is really about explaining how people get what they want, so that they can be happier. The western world thrives on this premise. However, when you bring morality into the mix, as Freakonomics tells, is where economics represents how it actually does work.

What makes this a chaotic, yet charming book is Dubner's commentary in Freakonomics - he is just so damned cool about it all. His attitude towards solving these riddles is personal, from disingenuous real estate agents, impact of legalised abortion on crimes in the US, to truisms that money buys elections. You'll just have to pick the book up and read it to see how fractal thinking can truly make sense.

Look, all-in-all I agree that incentives (for humans) are the cornerstone of modern life and understanding them is often the key to solving just about any riddle, and determining whether or not the riddle is designed to be solved.

I particularly flagged the folktale by the Czar who learned that the most disease-ridden province in his empire was also the province with the most doctors. His solution? He promptly ordered all the doctors shot dead. Hmmm. Interesting thought... Where there is information that creates a need or a trend, it serves someone's own agenda.

In a nutshell, I dig the theme that "the dependability of data meets the randomness of life". Like the story of the butterfly flapping its wings in China and causing a hurricane in New Mexico, the authors say that "dramatic effects often have distant, even subtle, causes." I guess that reality is that we can't always alter the future based on past data, but that doesn't mean we shouldn't try to understand its lessons.

Was this information helpful?